I realize I’m not the best person to come into any sort of confrontation.  I clam up, dwell on the situation for far too long, and generally don’t let go of it easily. 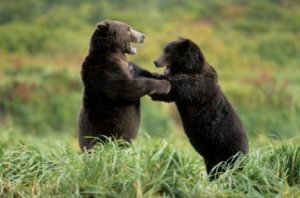 So I’m still thinking of the battle at our bible study last night.  It luckily happened after the study – when a couple of couples at our study had walked out to find their car blocked in by a big suburban.

I recognize this vehicle because it has a custom license tag on it, which I have associated with the mother and son who are always coming in and out of our condo lot in it.  However, I also notice it because one day as I went to go to work, I could hear her screaming at her son while she was in her house.  It wasn’t the type of scream that he should go to his room  either.  It was the blood curdling kind that made me want to hide and clam up even though I was in the parking lot.

Flash forward to last night, when I realize that it is her.  I quickly grab backup (okay, she intimidates me), which was probably the wrong approach because after a couple of knocks she comes to the door already on the defensive.  I mumbled that her car was in the way, and she uttered a few things like “great, now you have waken up my son”.

Then we get to moving the car.  Before she moves it, she says that she didn’t do it on purpose to block them in but because she had groceries and had to get her son fed. She then looked at us and snaps that visitors weren’t allowed in those spots in the first place – they were only for homeowners, gets in her car and backs up just enough to let them through and get her spot again.

I scurried off quickly.

However, even this morning I’m still a little annoyed by the whole situation. The defensive side of me wishes that I could have pointed out that Billy and I never take the upfront spots – so their two spots were equivalent to ours.  I’m frustrated that she somehow feels entitled to those spots when we routinely make sure that we don’t park there.  I am also angry that she was trying to sound considerate of her son, when I’ve heard things come from her mouth that even an adult shouldn’t hear.

On the other hand, I do feel sorry for this woman and her child.  I feel compelled to do something exactly the opposite of what I really feel like doing.  Instead of giving her my mind, I’m tempted to give her some brownies and a note to apologize. Instead of a mean lady, I see her as troubled woman who has lived through more trials than I have.

Even in this small situation I can see the real battle isn’t about the parking or my neighbor – it is between my sin and hate and the compelling nature of the Spirit.  It is clearer to me how in direct competition my will is with God’s.

What is even more clear is why I have to depend on God.  If looking for advice, I know that I could tell this story and get everybody on my side – except for God.  It blows my mind to think of how he loves, and I realize how incapable I am without his help.