A few weeks ago I was approached by Zondervan who was promoting a book called “Half the Church” by Carolyn James.  They basically wanted me to read the book and give my opinion on it. 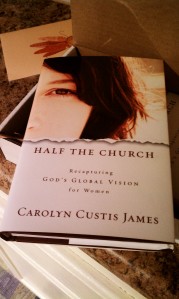 I must say, when it was sent to me in the mail I was a little skeptical of the message.  For those of you who know me, I am not the most feminist person that you’ll ever meet.  Some of this is due to tradition (I like men opening doors for me), and some of this is because I feel at peace to have a different skillset than men.

After leveling the playing field, she reminds us our identity with God by going back to Genesis and showing that Eve was created also in the likeness of God.  Being made in the image of God means that women are important, loved by God, and that he has a vision for us. She also notes several times in the book on how radical this notion is, especially in comparison to other religions.  She notes toward the end of the book, “Women on Jesus’ A-list of potential friends and recruits included prostitutes, adulteresses, a shunned Samaritan, insignificant widows, a ceremonially unclean woman, a dead twelve year old girl, and demon possessed woman.  Jesus regarded them with unheard of respect and gave them his undivided attention, even (and perhaps deliberately) when men were around.  He engaged woman publicly in deep theological conversation in a culture where respectable men avoided public conversations with women.  He entered their grief by weeping openly with them. He included women among his disciples, welcomed their friendship, forged strong bonds with them, was blessed and fortified by their spiritual ministries, and recruited them as leaders and kingdom builders”

She also debunks some of the misinterpretations of the attributes of women.  James urges us to look at the full characteristics of Jesus to learn what attributes we should have, and understand his definition or attributes like submission instead of accepting the world view of these attributes.  On this topic, she notes, “Jesus’ definition of submission isn’t about giving in to the whims and wishes of others.  It is rather about giving out from the completeness we have in him and our passion for his kingdom.  The submission Jesus models is gospel centered, for he was aligning himself with God’s purposes and pouring himself out to rescue a lost humanity.”

After replacing our tiny view of ourselves as women with God’s view – James addresses “The Great Debate” by noting that debates around particular bible passages to determine the authority or specific roles of women versus men in the church seem futile in the larger picture of God’s call for us.  She notes that we are beyond authority and beyond equality and called simply to a life of selflessness – a life poured out for the sake of others.  This being said, James shares when she wants to know what God calls her to do she takes a look at the women of scripture to give a larger image.  She mentions Eve, Naomi, Ruth, Hannah, and Mary and Martha – each story she mentions gives us a closer glimpse of what it looks like when God works through us women.

The book ends with a call to action to women to wake up and see what God has for us – for us to live in response to a God who made us in his image.

I think this book is a good read for women who may struggle to feel empowered, or those who struggle to see all that God has in store for them (which is mostly all of us!).  This said, I do think it is tempting when reading this book to forget that we, although designed by God, aren’t ultimately needed by God.  We are used by God by his grace – that he would not only forgive us but give us purpose – but he isn’t ever in need of us.  With this truth, I can be freed from legalism (do this, do that), and I don’t tire as easily because I don’t try to forge God’s work through my own strength but as a result of his amazing grace.

Although I believe he has a great picture of  the works he would call us women to do- we must never forget that the larger picture played out in the entire bible is God’s grace.  Through the lens of God’s grace – we see that though we are complete screw ups, we are completely loved by God.  Through this- we receive the motivation to serve a God that loved us first.  Let us not forget that.