As we continue from the first part to the second part of Ruth Chapter 1, we see a shift in focus to our new main character:  Ruth.  We learned previously that Ruth’s husband died, and her mother in law Naomi is urging Ruth to go back to her family and try to get married again 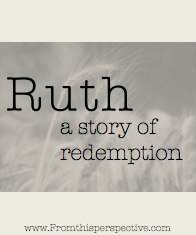 Now we see Ruth do something pretty absurd.  She pledges that she’ll never leave Naomi, and that Naomi’s God will be her God, and Naomi’s people will be her people.  Even in our current day in age, this would have seemed like the craziest thing Ruth could have decided.  Do you know how hard it would be for Ruth to find a man who wanted to marry a widow (who had no kids from her first marriage, and is likely barren)?  Now insert the mother-in-law baggage and Ruth might as well be alone the rest of her life.

Yet, somehow Ruth was adamant about sticking with Naomi.  You could say it was because of Ruth’s faithfulness, but I would argue at this point, it is 100% God working in the situation at hand.

So toward the end of the Chapter 1 in versus 19-22, we see that Naomi and Ruth make their way back to Bethlehem just in time for the barley harvest.  As they approach town, “the whole town was stirred because of them”.  In other words, everyone is politely talking behind their backs.  At this point, Naomi instructs people to call her “Mara”, meaning that “God has dealt bitterly with me”.  She added, “I went away full, and the Lord has brought me back empty.  Why call me Naomi, when the Lord has testified against me and the Almighty has brought calamity upon me.”

So we end the first Chapter of Ruth with harsh realities.  There is pain, and there is suffering that followers of God will experience.  Just like Naomi, there are times when we feel as if God isn’t for us, or at least he has poured us out so much that there is nothing left for us to give.